As one of the core team members of the Adapt Open Source (OS) Project I was at the LEARNTEC this year presenting the project and the amazing tools we built to create fully responsive eLearning content. I noticed that some people in the industry are slightly concerned about OS products. Therefore, in this blogpost I would like to discuss five preconceptions about OS, give examples, and share my experience with you. So let's dispel some of the biggest myths about open-source software (OSS) when it comes to creating digital learning content.

Let’s kick things off with probably the most famous myth about open-source software. This will also allow us to define what OSS actually means.

Open-source software is often also called free software. However the term “free” refers to freedom. One requirement for OSS is that everyone interested in the software must have the freedom to access the source code used by the software.

While the source code itself may be free of charge, you may often have to pay for extended support, training, or customization of the software.

I think this fear is based on two things: the preconception that OSS is developed by amateurs and students, and the fact that the source code is publicly available.

Let’s have a closer look at each of them…

Of course there are projects that are only carried out by individual developers or have started as student projects. However, bigger projects are usually baked by bigger organizations. For instance, Adapt is developed by leading companies in the eLearning business and used in production by each of them. As part of Adapt's core team I also know that every piece of code is scanned by at least 6 eyes and thoroughly tested. This process ensures not only safety, it also guarantees that only features are added which will not break the previous version and are useful for the entire community.

One might think that if you publish your source code, hackers can scan it for security exploits and use this knowledge for their next attack. One type of software that has probably the strictest requirements for security are web browsers. This makes sense as it is the browser that is the barrier between your device and hacked servers distributing malicious code. Well, all major browsers (Firefox, Chrome, Safari, Edge) are based on open-source projects (Firefox, Webkit, Chromium, …) or use at least parts (Chakra Core) that are OSS.

So if there was a security issue with publishing your code, none of the browser vendors would do this. In fact, the biggest exploit used by hackers for attacks through the web is Flash, which is a closed proprietary piece of software. Read here how a switch from Flash to HTML5 can profit you. 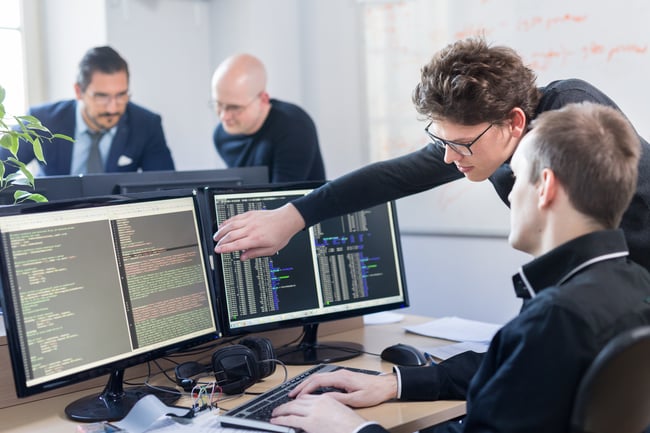 One problem with an OS project is lack of documentation. As a developer working on such a project I know that it is hard to maintain documentation that is up to date with the latest features. This situation makes it difficult for newcomers to get up and running with a new software as the only real documentation is often the source code itself. For Adapt, we try to provide good documentation on GitHub. We also help newcomers in the Adapt Forums and gitter rooms.

At LearnChamp we know that for companies speed is a major factor. Therefore we offer enterprise-grade support and training as part of our Ready-to-use Services for Adapt. These services help you and your team to get going with Adapt as quickly as possible. Once you know how to use the tool, we also offer support during production.

Open-source software is too technical

This may have been true in the past when Linux-based operating systems required terminal input. But in modern OS projects, design, UX, and usability are as important as pure technical features. For instance, with the open-source Adapt Authoring Tool, everyone can create responsive eLearning content without the need for programming skills.

Furthermore, through its openness and freedom OSS can easily be adjusted to meet user requirements. For instance, Totara and Adapt can both be extended and customized with plugins.

The way software interacts with each other does neither depend on who wrote the software nor on whether the source code is publicly available. What matters is what operating systems are supported to run the application and what formats for exporting the content are available. For eLearning the most important industry standard is SCORM. It is supported by all major LMS and authoring technologies.

Furthermore, tools that are based on open technologies usually create exports that are much easier to work with. In Adapt, for example, assets and text content can be reused.

These five examples show that if you make source code publicly available, it can help to develop more secure and more usable products. Besides that, the freedom you get with open-source software is a major driver for innovation. Developers and designers can experiment with new concepts and technologies, share ideas, and bring new concepts faster to eLearning. xAPI gets wider adoption in the industry. Mobile phones changed the way we think about web content. WebApps become more powerful, engaging, and responsive. In times like these we need tools that allow fast adoption and freedom to innovate. This is why I am glad that projects like Adapt exist in our industry.

Are you looking for an open-source authoring tool or do you have some specific questions? We are happy to help.